Imagine a student in an environmental science program. The past few months have been filled with hard work: conducting research, forming hypotheses, and running tests with multiple trials. Now, with the work completed, the student presents what she’s learned. As the audience applauds, the student feels a deep sense of accomplishment and pride. “This is it,” she says to herself. “I’m going to be a scientist.”

How old was the student in your imagination?

You may have pictured her finishing a Ph.D., or maybe turning in an important project as the capstone of her undergraduate education.

But did you consider that she might be in elementary school?

Though it may seem improbable, recent research has revealed that the best time to get kids excited about science is between kindergarten and fifth grade. After that, many students have already decided whether science and the environment are “for them.” Too often, especially among underrepresented groups in environmental science and policy such as girls and racial minorities, the answer is “no.” Once that decision is made, even high school-level science outreach might not make a difference. As environmental educators, we have missed this chance to make a connection.

When I arrived at Duke University to start my graduate degree in environmental management in the fall of 2019, I received an email looking for student volunteers to act as mentors in an after-school environmental science program at Durham elementary schools. The program was called ELEMENT – short for ELementary Environmental MENToring.

I signed up, thinking that it would be a good way to give back to my community. I didn’t realize at the time that I would soon be drawn into a world of activists on the cutting edge of improving how and where we help make connections between people and the environment. 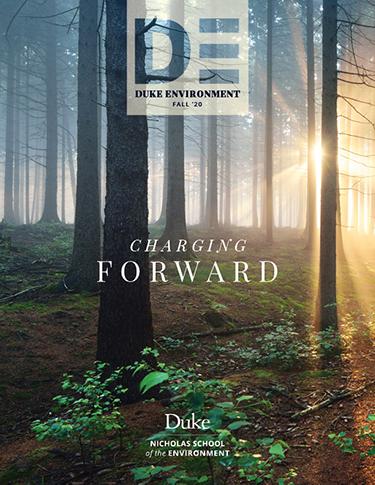 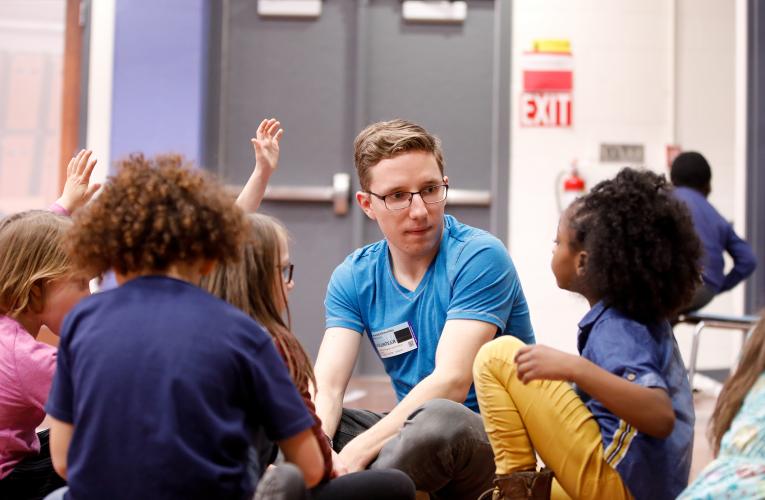 The opportunity I’ve had through the ELEMENT program has helped me acquire new skills and given me a broader perspective on some big challenges my chosen field now faces, such as how to get more students excited about science and the environment, and how to boost diversity and ensure equity within our ranks."

A New Style of Engagement

ELEMENT began in 2018 as a team effort between Nicholas School of the Environment lecturer Nicki Cagle and Ph.D. candidate Kimberley Drouin.

“I proposed the program as part of a pivot toward a greater focus on diversity, equity and inclusion at the Nicholas School” said Cagle. “Conversations I held with faculty members in 2017 showed that diversity in environmental education was one of most important things that our school could improve on. At the same time, a huge survey of local environmental programs revealed that few organizations were focusing on elementary-school age students, who research tells us are the most important to inspire. I wanted to help provide a pathway to environmental education and careers for those students.”

Drouin, who had been looking for ways to help the Nicholas School do more in the community, volunteered to play a leading role. She spent long hours making connections with Durham Public Schools, writing lesson plans and recruiting Nicholas School students as mentors. Thanks to the combined efforts of Drouin, Cagle, Durham K-5 teachers and Community Education afterschool managers, the program soon got off the ground. Duke student mentors began using games and other activities to teach environmental science once a week to elementary schoolers enrolled in after-school programs. That was the context that I stepped into when I volunteered at the start of the program’s second year. 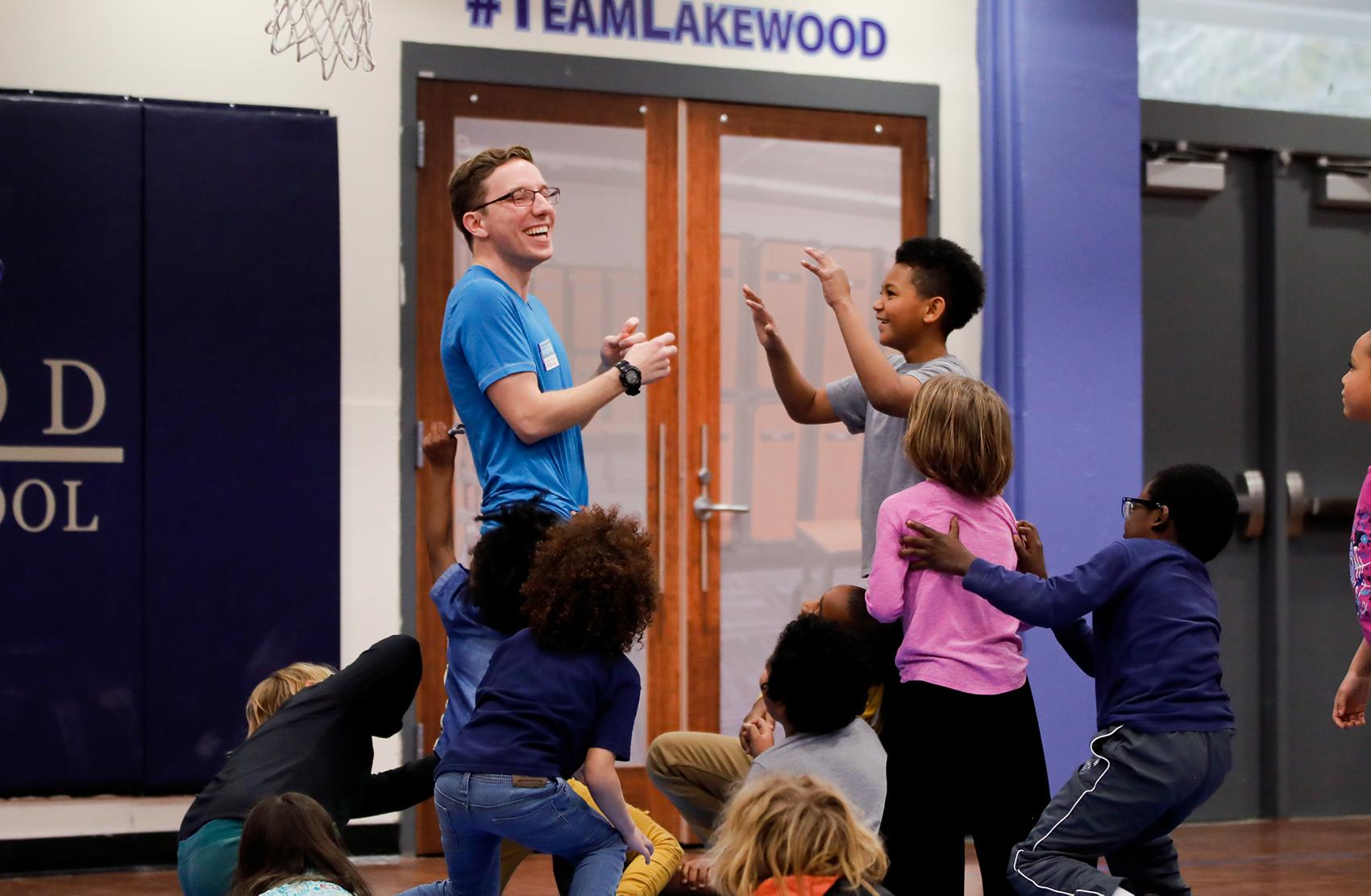 As I drove to Lakewood Elementary School for my first day, I wasn’t sure what to expect. I had taught kids about science before, but that had been at a summer camp. By and large, the kids at camp chose to be there.

With ELEMENT, we were entering into the kids’ space and asking for their time. Would they be willing to participate? My co-mentors and I had discovered that, if we weren’t offering the program, the students staying after school would be having an extra recess during our time slot. Recess! How was I supposed to compete with that?

When we arrived at the school cafeteria where the program was being held, my co-mentor and fellow Master of Environmental Management student Rani Kumar addressed the kids. “How many of you like science?” she asked.

Out of a group of twenty, about six raised their hands.

“Okay!” Rani said. “By the time this program is over, I hope that all of you will be able to raise your hands when I ask that question.”

We split the students into groups and started the day’s first activities: icebreaker games.

There I was, working with six students, not sure how well things were going to go. We were supposed to draft our team rules and, sure enough, I had misplaced my pencil. Crayon would have to do. Then, during a name-learning game, one of the students made a declaration.

“I’m not going to play this game” he announced. “I’m going to read this magazine.”

This is part of the reason why people are excited about teaching teenagers or adults are intimidated by the idea of working with younger kids. You never know when your plans may take a 90-degree turn thanks to the most unexpected comment or action.

I looked over at the student, who I’d been having a hard time getting involved since we started. I was worried that he wouldn’t get anything out of the animal-themed activities we had planned for the rest of the hour. “You have to come up with something to get him interested,” I thought to myself. But what?

I looked at the magazine he was holding. It was one of those National Geographic Kids pieces, entitled “Everything Sharks” and a great white shark was bursting out of the cover, mouth wide. My eyes moved to the student’s shirt. It was also covered in sharks.

It couldn’t be that easy, could it?

“What’s your favorite shark?” I asked.

“The bull shark,” he answered immediately. “Did you know they can swim in rivers too, not just the ocean?”

I had to admit that I didn’t.

Just like that, he and I made a connection. Then, he joined in on our games. He even took on leadership roles in future weeks, helping other kids understand ideas like water pollution using explanations involving his favorite animals.

Time and time again, I found that relating to the kids on topics they were interested in and then connecting those topics to our environmental theme of the day was the best way to capture their attention and spark their interest. 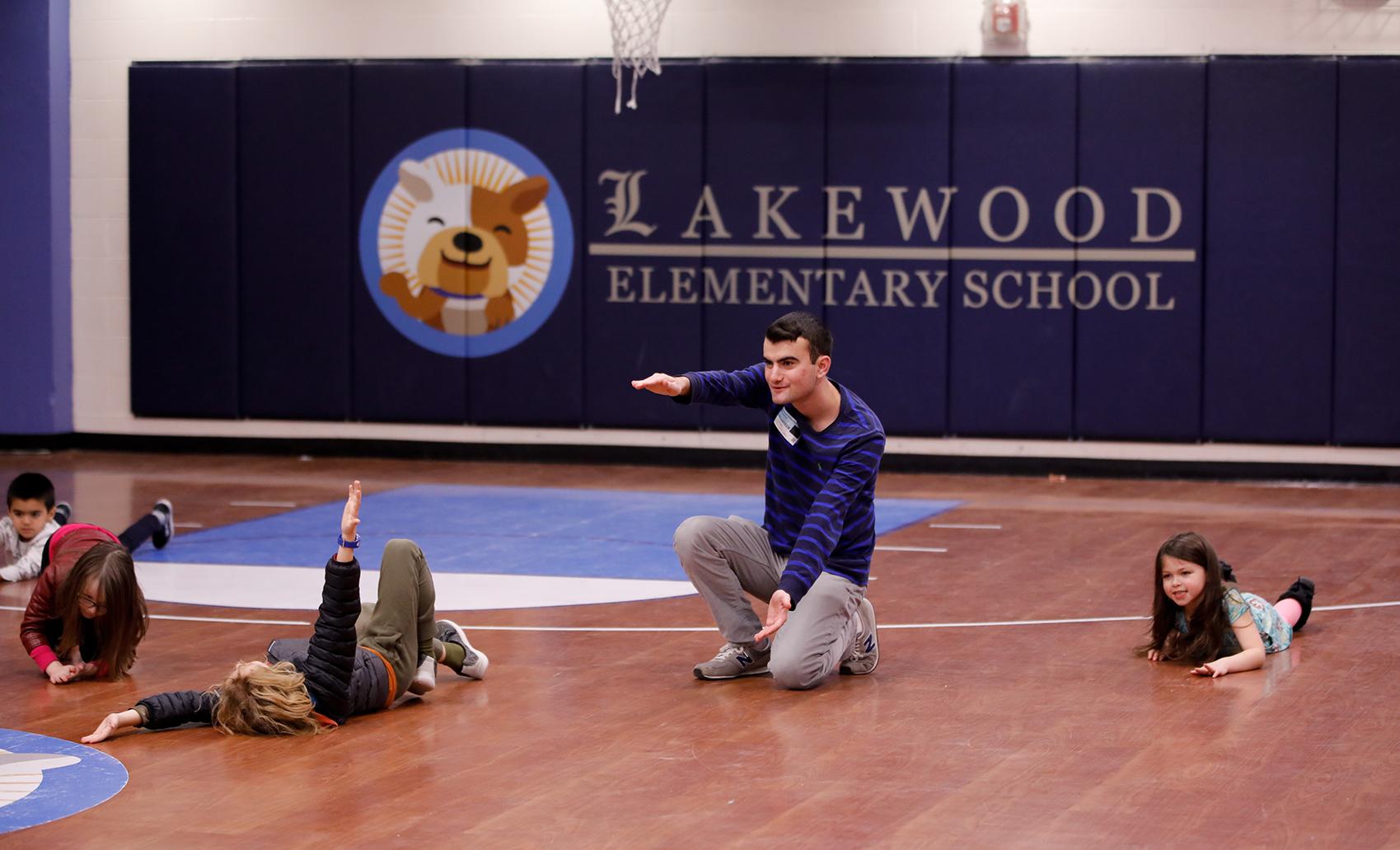 One of the most important pieces of feedback the students gave us on our first day was that they wished our science-themed games were more active. For the second session, we moved into the school gym. Our version of sharks and minnows, transformed into foxes and squirrels to be more relevant to Durham wildlife, was an instant favorite. It got even better when the afterschool group leaders joined the game. The active approach had academic benefits, too: after all that exercise, everyone was able to calm down and have a fruitful conversation about how predators and prey interact in an ecosystem.

My group of kids had extra fun with lemurs, which became our democratically elected team mascot after my students noticed my Duke Lemur Center t-shirt. The next week, I brought in pictures of different species of the signature Madagascar primates and asked the kids to pick the one that best matched their personality. One chose desert-dwelling ring-tailed lemurs because they liked hot days; another went with nocturnal aye-ayes because they loved to stay up late.

By making exciting connections between wildlife and their own habits, the kids were able to learn all about different animal behaviors and environments.

Oh, and remember when I mentioned the science student presenting what they had learned? We had that too, though in a format more appropriate for elementary school.

At the end of each day, our teams sat in a circle and talked about what they had learned from our games. Not only were the kids excited to talk about complicated topics like pollution control, animal adaptations, and states of matter, but they also had ideas that took our conversations in directions that I hadn’t even thought about.

Eli, one of my students, liked pretending to be a rock. Any time we played a game that required the kids to pretend to “be” something in nature, that was what he wanted to be. And soon the other students were following his lead. By the time we reached our last session of the year, half of my team of expert scientists were curled up, pretending to be rocks, despite the fact that the session was supposed to be on water, ice and steam.

I didn’t mind; they were still holding a great discussion about water. But it did give me an idea for a new topic.

“Do you think water could break rocks?” I asked. I was thinking about erosion. Charlotte, though, had a different idea.

“Yes, I think water could break a rock,” she answered confidently. “If you fill a big cup with water and drop it on a really thin rock, the rock might break!”

Once again, I was caught off guard. That wasn’t the answer I was expecting, but it was creative. It was interesting. And it showed that Charlotte was thinking about the topic and engaging with the ideas she had learned in a whole new way.

That kind of creativity is what we’re going to need out of the researchers and policymakers of tomorrow. Charlotte wasn’t just repeating facts she had read in a book: she had made a hypothesis. She was being a scientist.

To me, all of this shows that ELEMENT works. When we taught science in a way that they appreciated, the kids were excited, rushing to participate, and building brand new connections of their own. The growth that I saw showed that we made a difference for an

important age group that is often overlooked when people think about how to build a more diverse future in environmental education.

I was especially happy when, in another of our recap sessions, a student named Ayanna told me that she wanted to go to Duke when she got older. Take that, recess! 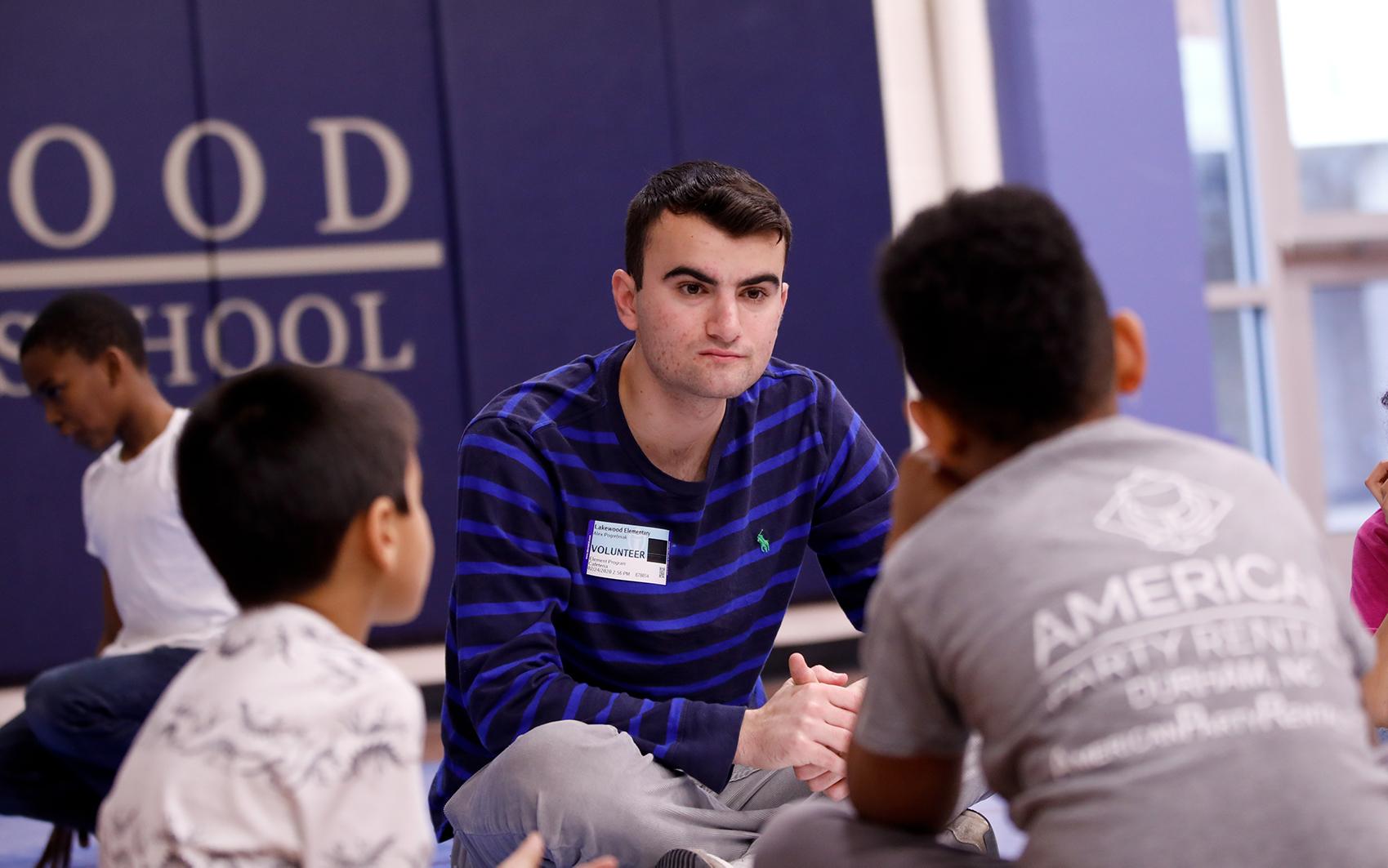 Today, at the Nicholas School and in the Durham community, commitment to improving and expanding environmental education is growing.

Starting this fall, the ELEMENT program will be staffed and supported by students in the Nicholas School’s brand-new Environmental Education Club. (Because of COVID-19, the program is temporarily on hiatus, but the goal is to start it up again in January 2021.)

“We received a huge amount of interest from Nicholas School students for a club focusing on the subject,” said Chelsea Sloggy, an MEM student and environmental educator who organized the new group. “Environmental education often isn’t considered a valid full-time job. We’re trying to show how important environmental education skills are while also doing more to share our resources and privileges with the greater Durham community.”

In the end, I feel that the opportunity I’ve had to engage with environmental educators, Durham teachers and afterschool group leaders, K-5 students, and my fellow mentors through the ELEMENT program has helped me acquire new skills and given me a broader perspective on some big challenges my chosen field now faces, such as how to get more students excited about science and the environment, and how to boost diversity and ensure equity within our ranks.

It’s all about making connections. Mentor to student, university to city, environment to people. In Durham, those connections are just getting started. I’m looking forward to watching them grow. 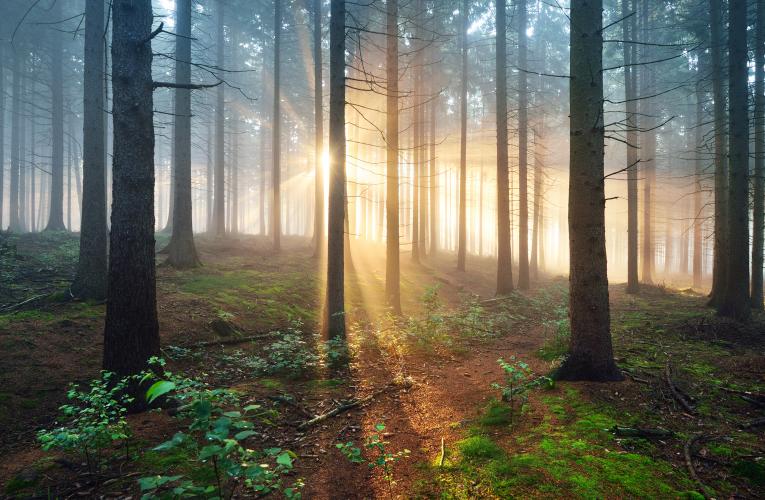 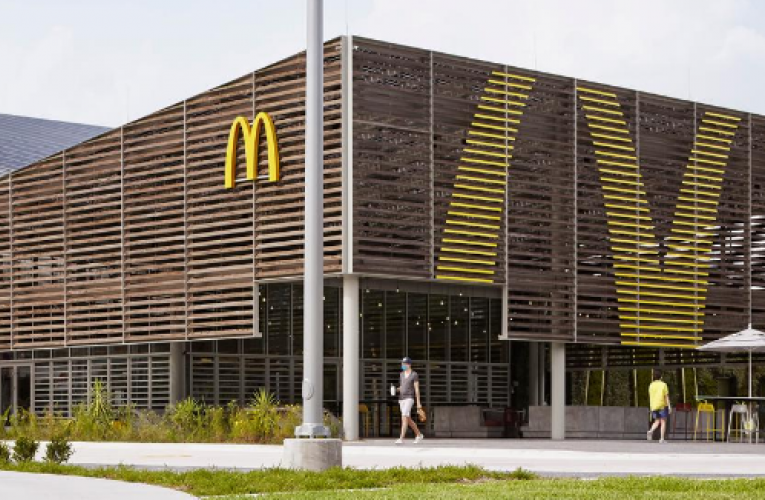 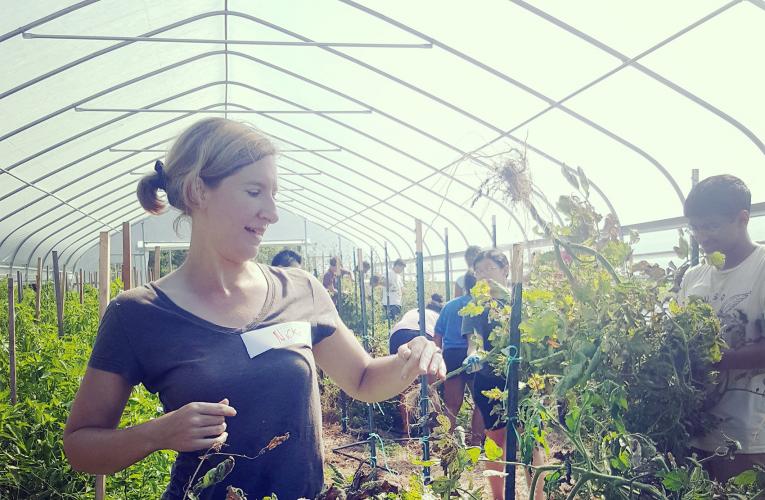 A Pathway to Success